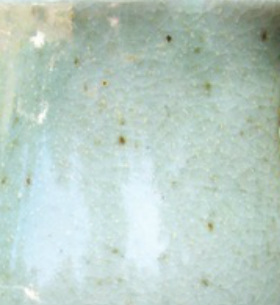 Serpentine Celedon
A good glaze does not make a good pot, but enhances it.
I have for many years had some apprehension about glazes. Most glazes, particularly the colorful ones, have toxic metal compounds in them. Lead is the most well-known and the most dangerous to the user, but is rarely used in this country anymore, and never used in cone 10 stoneware. Barium carbonate is the only compound sometimes used in high-fire glazes that is known to be leached to a small degree from fired glazes if an acidic food is left in the pot. (I do not use barium in my glazes.) These toxic metals are mostly fused in the glass of the glaze to such a degree that they pose no hazard to the user, but they are hazardous to the potter, who is mixing the powdered minerals together with water and applying them to the pots. Many of the most toxic substances are coloring agents such as cobalt, chrome, copper and manganese.
In the 1990's I started experimenting with inventing my own glazes using local muds, silts, clays and wood ashes, usually in combination with commercial rock dusts, both as an interesting quest and to create less toxic glazes. Knowing that iron compounds, common in our soils, are the most versatile and safe coloring agents in glazes, creating subtle earthy shades of black, brown, tan, orange, yellow, red, pink, blue and green, I began with the approach of color.
My first experiment was quite successful: my Navarro Celadon. Pale to olive green, grey and pale blue celadons were first invented by Korean potters of ancient times using wood ashes, feldspar and clay. They require a base with a significant amount of calcium and a small amount (0.5 to 4%) of iron. They must be fired in reduction or they will come out clear to pale yellowish. I used a base glaze invented by Bernard Leach, which he used alone as a clear glaze or with added yellow ochre as a celadon. I added varying amounts of Navarro river silt to the base, and found a very pleasing semi-translucent sea-green celadon that seemed to me to have a quality close to that of ancient glazes. I found this exciting, and it encouraged me to experiment more.
Glaze development is a very complex subject, and glaze chemistry is not covered in standard chemistry texts. However, my background in sciences allowed me to understand glaze chemistry. I have developed glazes through the above method of substitution and trials, through Ian Curry’s grid method, where with volumetric blending you mix a base with 2 variables and make 35 variations on one large tile (which is the best suited to using unanalyzed native materials), and through the Seger method, where you substitute equivalents based on a scientific analysis.